I´ve been graduated from the Sibelius Academy but all the diatonic accordion teachers has been traditional players. One of the most important ones was Tauno Aho (1914-1996) who lived in Kuortane where I was born as well. With him we had many moments when I was listening his playing and recorded his music. Nowadays I would like to say that the most important thing was that we discussed a lot about music.

Please, list some musicians or compositions you love that you feel so close to your musical formation.
Besides our own Finnish traditional music I´ve been very interested in music cultures around the world. Of course, the Nordic tradition has been close to me but I´ve also been interested in Celtic and Latin music, American traditional music, European classical music, African polyrhythmics etc. There are too many great musicians, compositions and traditional tunes to put on a list.

Can you try to define your aesthetics in playing diatonic accordion?
Maybe one of my main aesthetic value in music is beautiness. In all my compositions I try to find beautiful, natural but/and meaningful melody lines. When composing I can sometimes be stucked with some musical line for many days and comparing different solutions how to proceed. My opinion is that every note in music has to have some meaning.

I also understand very well and pay attention to the fact that this world is not consisting only of beautiful things and the music can also reflect the world as it is, but that kind of music making is not for me.

Which is in your opinion the best way to teaching to play diatonic accordion?
During the years I have tried different methods in teaching diatonic accordion but my favourite choice is learning music by ear. It can be frustrated while starting it, but during the years you can notice learning not only the right melody lines but also the ornaments, enphasis of the notes, right frasing etc. Nowadays my only teaching method is learning by ear.

What's about the Finnish traditional music trends today?
Finland has been one of the first European countries to have folk music education on the university level at the Sibelius Academy in Helsinki. This education started in 1983 and several well known Finnish accordion players like Kimmo Pohjonen and Maria Kalaniemi have graduated from there. This education has raised the knowledge of our tradition and it has inspired young musicians to study it. In addition, the education has given a good opportunity to create new historically based music, which may take influences from different cultures.

What are your future musical projects?
At the moment we are finishing a duo album with the former Värttinä bassist Pekka Lehti. For 2008 I have several projects in row, which include e.g. a sheet music book consisting of traditional music played by the legendary Finnish musician Tauno Krossi (1924-1979). Hopefully I will record a new solo album too. There will be some other cd and book projects with the Värttinä group, and then of course lots of concerts and touring. - Let´s hope something would happen also in Italy!
Pubblicato alle 22:59 Nessun commento: 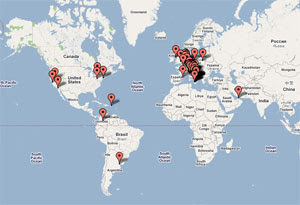 The Blog in your language!